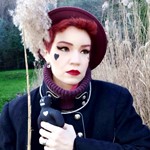 GET TO KNOW AND TO LOVE MARYANN GISELLE ALIENFAIRY -

don't miss your opportunity to discover this brand-new debut singer
with a very particular voice filled with the charms of the old times, the mystery of aliens and the promises of fairytales to turn into reality.

She really has that rarest and perhaps most accidental of gifts: an ORIGINAL VOICE.
Maryann's very own signature voice is fresh, young, fairy-like, distinctive, ecclectic, haunting, absolutely unique
like something unusual never heard before !

Her performances seem like theatrical Shakespear plays set in Italy and like she escaped from a romantic gothic art painting in the 15th century. One of her uncles was an art historic professor &
growing up she read tons of books about art history, poets & fashion, which may account for the ecclectic style.

Although she has just appeared on the music scene as a rising star, she is very professional, learns very quickly & is easy to work with - thanks to her 12 years of modelling experience & her polite, kind, open-minded & warm-hearted character.

The feedback was so positive that he encouraged her to start as a solo singer.
He became her producer and manager and publishes all her songs and music videos under his label DRecords.

And here she is - Maryann Giselle Alienfairy -

she is both - a work in progress and a masterpiece.

This is just the beginning !

It will be fascinating to see how her career progresses as she wields a fantastic realm of purity and oddness
and how she will flourish under the wings of Indie music.