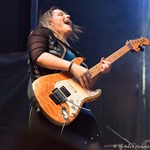 Strange Kind Of Women - The only female tribute to Deep Purple

Eliana Cargnelutti is the most famous italian rock blues female guitarplayer, she did her part in the international Tour with the Blues Caravan project “Girls With Guitars” of Ruf Record label for all the 2015. Eliana was the winner of the Blues Contest in Pordenone, Italy, in 2010, she won the blues award as the “best new young artist” at “Oscar del Blues” in Modena, Italy. She was named one of the five “best female guitarists” in the rock blues scene at the American “Jimi Awards” in 2015 and she was nominated the 5th best female guitar player of the rock blues world by Blues E-news magazine.

3 CDs, an international label, an incredible band, this is the perfect mix for an amazing show. Eliana plays a flavour of rock blues with a bit of everything in between: electric funk, mixed with pop and jazzy instrumentals, raw rock, tight blues grooves, illuminated by her skills as an electric guitarist. Her sets truly have something for everyone.

Eliana is also the guitar player of many other projects:

- 3PLAY - the acoustic trio of eliana, covers and originals