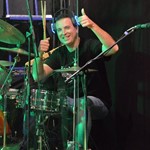 THE SHADIAS - The House of Rising Sun (COVER)

THE SHADIAS - Skin and bones (COVER)

Sarkomand is the stage name of Alessio Petricca. Roman drummer, percussionist and composer, born in 1984.
Sarkomand name comes directly from the story "The dreamquest of unknown Kadath" of Lovecraft, the favorite writer of Alessio. It is a fantastic city where the gate is protected by two enormous winged lions. At first time Sarkomand was the title of a song and an album of the band BRUMA founded by Alessio, active between 2003 and 2007. Then the same Alessio decided to use the name as a pseudonym, at first on Internet, then also as a stage name. Many people know him directly as Sarkomand.
The artistic activity of Sarkomand begins at the turn of the '90s and 2000, at the time of high school. The predominant musical influences initially were mostly rock and heavy metal, then, over time they entered the overwhelmingly dark, new wave, post-punk, but generally listening is open to various genres, such as blues , erupting in electronics, from the more commercial house, the fast beat of techno, electro, up to the underground Industial and EBM.
Sarkomand' favorite drummers: Hellammer, Nicholas Barker, Thomas Stauch, Rhino, Danny Carey, Dave Lombardo, Nick Mason, Lars Ulrich, Bill Ward, John Bonham, Ian Paice, Phil Collins, Carter Beauford, Mike Bordin, Cozy Powell.
Projects in which took part Sarkomand, cover band of: Black Sabbath, Ozzy Osbourne, Metallica, System of a Down, Joy Division, Rammstein, and generally various projects, mainly based on rock, ranging from the '60s to 2,000.
At a distance of 7 years from the end of the aforementioned Italian rock project "BRUMA", at the end of 2014 along with other musicians found the project that the following year will be called THIS CORDIA, Italian/English original rock project. Between 2017 and 2018 he was part of the classic rock cover band "The Shadias". In 2018 he joined the band "Fab & the good ones", from 2019 he is the drummer of Geeskoff. Other artistic interests of Sarkomand are singing and dancing.